A Brief History of the Big Bear Valley 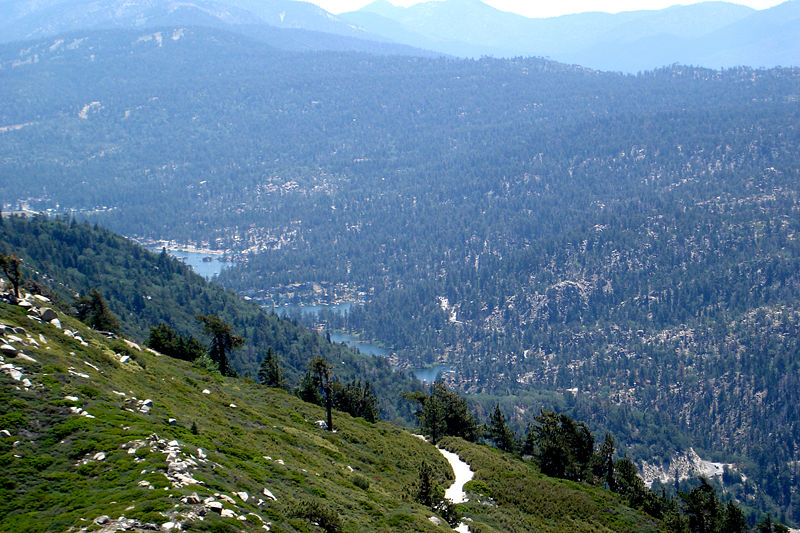 Big Bear Lake, one of Southern California’s most popular resorts, actually began as a paradise for hunters and miners during California’s gold rush days. In 1845, Benjamin Wilson accidentally discovered Big Bear when he passed through the Eastern San Bernardino Mountains during an expedition to the Mojave River. Due to an abundance of grizzly bears, the high mountain area became know as Bear Valley. The grizzly, along with deer, beaver, and waterfowl, attracted marksmen and trappers to the area. The mountain men quickly began to seek more than wild game.  Soon, the discovery of gold in other California mountains triggered a hunt for mineral wealth in Bear Valley.

The region was rich with gold and silver ore, luring enough prospectors to form the Bear Valley Mining District in April of 1860. Adding to the excitement was the gold rush in Holcomb Valley, immediately north of Bear Valley, a discovery that caused the greatest mining rush in the San Bernardino Mountains.  To feed the influx of miners, ranchers brought their cattle to Bear Valley.  From the 1880’s until the early 1900’s, hundreds of cattle grazed each summer off the rich grass, and then migrated to the desert during winter

In 1884, Bear Valley changed from a hunters’ and miners’ paradise into a haven for sportsmen and vacationers.  This major transformation resulted from one man’s vision to create a reservoir for the town of Redlands.  Located southwest of the Bear Valley, Redlands was a growing community with many citrus groves.  Although the Santa River and nearby creek provided water for trees, a more dependable year-round water source was necessary.  In May of 1883, Frank Brown, co-founder of Redlands, along with a companion, traveled to Bear Valley in search of possible water sources.  The only visible water was a small, shallow lake (present day Baldwin Lake), and a few meandering streams and patches of left over snow.

Seeing beyond this, Brown decided to build a dam that would harness the mountains’ winter floods for summer use. A 45-foot dam was completed in the Valley’s west end in 1884, creating a sparkling lake over six miles long.  Today this is known as Big Bear Lake. Dozen of visitors began spending summers in abandoned log cabins and in the surrounding pine forests. Then, 1887, thousands of fish from Lake Tahoe were transferred to Big Bear Lake.  Fisherman were hooked.

The following year, 21 year-old Gus Knight, Jr., along with follow cattleman John Metcalf, built the first Bear Valley Resort along the south shore of Big Bear Lake.  Although the Bear Valley Hotel would not be ready until June, every room was reserved by May. Getting there, however, proved a major obstacle.  The only wagon road was long and winding, often washed out in the winter and in need of constant repair.  San Bernardino did not want to fund construction or maintain the road, and the challenge was overwhelming for private enterprises. Even by 1892, passengers spent a day and a half traveling from Redlands to the Bear Valley Hotel.  Finally, county supervisors decided to break their long-standing policy against using public funds.  In 1915, the famous Rim of the World Drive surfaced, allowing motorists to drive through the mountains to the resort community, newly named Pine Knot.  Pine Knot grew rapidly.  By 1921, it had an estimated population of 8,000, ans as transportation continued to improve, the area became even more popular.

Winter sports, which would eventually make the resort a year-round attraction, began in January 1924, when the Sierra Club held its annual Winter Sports Meet at Baldwin Lake.  Ice skating and tobogganing became favorite activities, and the Big Bear Lake Park district formed in 1934 to develop other winter sports in Bear Valley. Pine Knot changed its name to Big Bear in 1938.  Big Bear hibernated during World War II, but as soon as the war ended, the community awoke to new homes, businesses, and recreational facilities.  The resort created an avalanche of winter sports.  the first ski-area, Snow Forest, was constructed in 1949.  Snow Summit, which offers 18 miles of trails on 230 acres, opened in 1952, and in 19590 the Moonridge Ski Area opened.

In the mid-1970’s, Goldmine Associates greatly expanded Moonridge and renamed it Goldmine.  Goldmine was purchased by one of the industry’s leading ski resort companies in 1988 and renamed Bear Mountain Ski Resort.  Then in 2002, Bear Mountain Ski Resort and Snow Summit combined under the same ownership, offering skiers and boarders Southern California’s best riding.

Big Bear Valley, once roaming with wild game, now is only a few hours drive from anywhere in Southern California, and entertains more than 100,000 visitors on holiday weekends. A true four-season resort, Big Bear offers clear skies and moderate temperatures 330 days a year.